A remarkable academic paper begins in 1994 with someone looking for a huffy hut. And Lady Serendipity gets a name check . . .

Gazetteers give the origin of Murthly as ‘mòrthulach’, Gaelic for a big mound or hillock. Yet the knoll on which the castle stands is not the highest hereabouts. Indeed, you will find that point of airy elevation on the road leading out of the village towards Stanley, last farm on the left: Ardoch, Gaelic for ‘high place or field’. 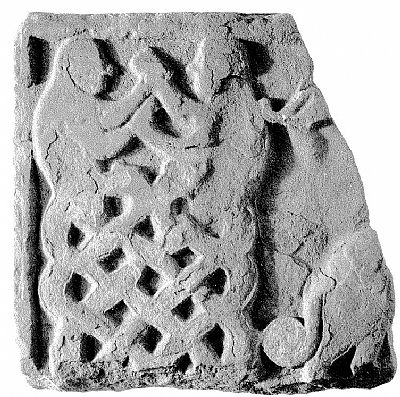 An academic paper, ‘A sculptured fragment from Pittensorn Farm, Gellyburn, Perthshire’ by Mark A Hall, Isabel Henderson and Simon Taylor, argues the significance of the original site lies not in height, but purpose. The ‘tulach’ part of the name could follow the Irish meaning of ‘assembly mound, mound of judgement’. There is a sense the authors are straining at the academic leash here; commendably held in check by years of discipline not to read too much into a broken stone. But you can tell they feel it in their water: they’re onto something.

‘Chance and serendipity played a large part[in what follows]’, they write.

In July 1994, Bob Jarvis, then Principal Officer in charge of Perth Museum’s excellent in-house exhibitions, was at the back door of Pittensorn Farm negotiating a price for a garden shed with the tenant, Mr Davidson. He noticed a carved stone fragment leaning against the wall. Davidson said he had dug it up while gardening about five years before, and didn’t it look nice there. Now, how many times since had he opened that door to visitors? This time Lady Serendipity ensured it was to someone who would see the decorative stone and feel hair rising on the back of his neck. Oh, just in case you think I’m belabouring the point, Bob Jarvis instigated this. He had placed an ad in the Courier saying he wanted to buy a shed; and by chance Mr Davidson had replied.

Events moved quite fast after Mr Davidson agreed to let an expert examine the stone. Bob’s suspicions confirmed, it was wrapped and boxed and off to Perth Museum. Matters got a bit Mikado-ish then for a few months, waiting on Ko-Ko, sorry the Queen’s and Lord Treasurer’s Remembrancer, to get down his little list of Treasure Trove Advisory Panel decisions and rubber stamp allocation to the museum, with a reward valuation of £750. The stone fragment was entered on the museum’s catalogue in February 1995. Subsequently, Dr Isabel Henderson, an authority on Pictish art, gave, on the basis of a photograph, her preliminary assessment: something long the lines of, ‘Well, that’s unusual.’

‘From this it was clear the piece was of sufficient interest to publish a fuller account, not least because what survives does not appear to be part of a readily identifiable type of monument.’ (p129)

Mark Hall, now Perth Museum’s Collections Officer, put together a multi-disciplinary study team to examine the Pittensorn fragment within its wider landscape and cultural context. The study involved art-historical, geological, landscape archaeology, and place-names strands. For help with the latter he enlisted Dr Simon Taylor, Reader in Place-Names Studies at the University of Glasgow. Isabel Henderson provided the artistic context.

The Pittensorn fragment features wrist holding men of a type found on, yet subtly different from, Pictish carvings as far apart as Sueno’s Stone, on display in Forres, and Monasterboice in Co. Louth, Ireland. It is a motif that appears in various guises in some 8th century manuscripts, including the Book Of Kells held in Trinity College, Dublin.

It is also one of three Pictish pieces to have been found locally, within less than half a mile of each other. Another is the Gellyburn Cross Slab which, although damaged and missing a piece from its upper half, is nevertheless intricately carved with Pictish and early Christian motifs. It was discovered built into the foundations of a cottage in Gellyburn, in 1949. The third is the Gellyburn Symbol Stone, turned up by a ploughman in the field adjacent to Farina Cottage, in 1886. It is possibly part of the same panel as the Pittensorn fragment. All three pieces are of micaceous sandstone consistent with the seam in Gellyburn quarry. Although similar sandstone has been quarried at Gourdie Hill – which first provided stone for the legionary fortress at Inchtuthill – and Kirkton of Lethendy.

The authors also provide detailed evidence of a concentration of Pictish material within a 6 mile radius of Gellyburn, all dated between the 7th - 10th century.

Yes, professional integrity compels them to offer the possibility this material could have been dispersed around the area following the partial destruction of Dunkeld Cathedral during the Reformation. On balance, however, the authors are drawn to to conclude a lost early medieval ecclesiastical centre, or at least a shrine, in the vicinity of Gellyburn was really. . . possible. So, look twice at any stone fragments you stumble over next time you are down in Gelly Den.

Long before the medieval barony and castle keep of Murthly on its low knoll, Mòr thulach may have been the site of a secular authority co-existing with or supporting such a centre.

From which the accompanying illustration is also taken.