Ever organised a photocall?  Having everyone assembled at the right place, on time, with the photographer, is not easy. Even in the age of mobile phones and instant messaging. (Scoring a dry day is always just pot luck.) And here’s one very likely arranged by postcards and telegrams. 1 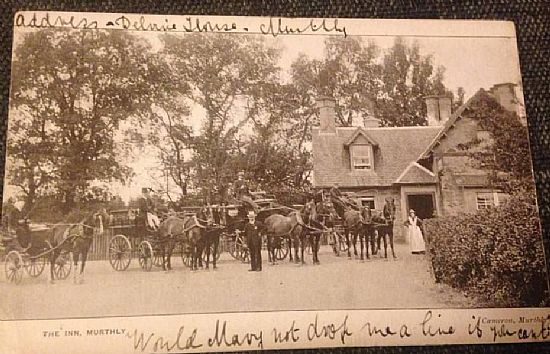 An elderly businessman gestures ‘TA-DAH!’ at a parade of four carriages, his coachmen in their Sunday best, taken out of service for the morning. Posing here for a professional photographer, possibly over by train from Dundee, lugging a wooden tripod and bellows camera.

It’s no coincidence his chariots are lined up at Maggie Sutherland’s door. As we shall see. (That’s not her in the picture, by the way.)

This is an example of cross promotion, early 20th century style, but of an already established, even common practice. By the 1900s, postcards sold by the million. Valentines of Dundee, for example, was only one of many companies that printed topographical views by the ton. Jane Cameron had a range of them in her post office in Station Buildings, beside the railway crossing. Images of the village printed as postcards to sell from the shop, with the added benefit of promoting ‘Cameron, Murthly’. A view of Murthly Inn, with an impressive display of the various carriages and wagonettes available to hire from there or at the station would have been a welcome addition.

When this image was put up on the Murthly History Group’s Facebook page some time ago no one was able to date it, or suggest whose carriage and horse hiring business was being promoted here. Cameron’s shop and the Inn both get a mention, but the principal focus goes un-named.

Best guess, gleaned from the reverse of the card, is that the photograph was taken between 1902 and 1905.2

Evidence collected from the Scotland’s People website, Perth County Valuation Rolls, and the Castle archive, suggest dapper man is most probably James Robertson. Although born in Dunkeld, in 1830, he carved a living in Spittalfield as a blacksmith before branching into the horse hiring business, and renting out wagonettes and carriages, with or without a coachman. Along the way he picked up contracts to carry post to Dunkeld and Blairgowrie, and arranged a regular ‘bus’ service from the village to Murthly Station on Mondays and Fridays. He was also the local ‘man from the Pru’ – acting as an agent for the Prudential Insurance Company.

The 1901 Census record for Spittalfield4 shows James senior’s household consisted of him and Elizabeth, along with youngest daughter, Annie, and a nine-year-old grandson, Robert (who actually lived next door, but was there on Census Night to make life awkward for future historians). He also provided lodgings for a couple of his workers; another blacksmith, Charles McLaren (26) and a postboy (horse), Kenneth Stewart (34). Next door was James junior, now married with four children. James was listed as a ‘carriage hirer’, Next door to him was third son, Richard, married with two sons.

At this stage the Robertson business was still centred on Spittalfield. Murthly only came into the picture from the following year.  James and Elizabeth with, presumably, Annie rented the cottage directly behind the Inn from Maggie Sutherland, for £5 p.a.5 Although there was a stable on the premises the area seems much too cramped for Robertson & Sons to have been operating a four-carriage hire business. Or so I thought. Jim Black's recently published The Heart of The Stormont: Past Times in Spittalfield, Caputh and Round About (Abertay Historical Society, 2020) mentions a piece in the Blairgowrie Advertiser (18th January, 1902) confirming the Robertsons did rent the stable. What is puzzling, however, is that James senior’s primary occupation was as a blacksmith. Murthly already had a smithy. It was half of an ‘L’ shaped building behind Dunsinane Cottage on Station Road, rented to James Malloch. (The other half was a joiner’s shop let to James Mitchell.) By spring 1905 Malloch had retired to live in Oak Villa on the old turnpike road (now the B9099), but the smithy lease went to a John McIntosh, living in Annat Lodge, who also picked up the good will account with Murthly estate, ‘shoeing horses and carrying out repairs to farm implements’.6

The blacksmith’s version of a dripping roast . . .

McIntosh’s tenure was short-lived. In December 1906, James Robertson & Sons finally took over the smithy lease, renting from John Thomson, who had bought some properties in the village after retiring from running the Logierait Hotel.  Their name preceded the ‘shoeing horses’ line for the first time in the estate ledger that month.

James junior continued to hold down the Spittalfield end. However, new stationery indicated a change of emphasis. That ‘Spittalfield’ is crossed out in the accompanying image probably only indicates this particular hire was Murthly related, but clearly head office had moved.7 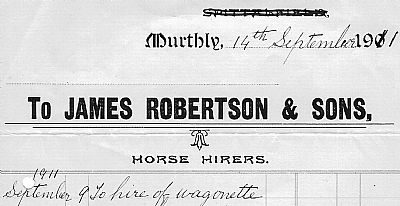 The postcard shows seven horses. Allowing for a bit of hyperbole, of the Robertsons padding out what they have to offer, say by having James junior bring a carriage over from Spittalfield for the photocall, that’s still a lot of stabling, and feeding. The whereabouts for the latter is still unclear. The Inn had for decades the pendicle of land between the turnpike and the railway, stretching all the way down to the green bridge. It would have been a good fit for the Robertsons to take this grazing as well as the cottage and stable. However, successive lairds gave building feus on that ground, for Oak Villa, Mobile (since renamed Lundin), and Beechwood.7 By 1902, Maggie Sutherland had hardly any grazing left (basically, what’s now the playing field behind the village hall) and but a few shillings off her rent to show for it.

Grazing, whether on a pendicle or grass park, was hard to come by. There is a scattering of vacant houses, short term, throughout the rental records, but never a season when a park or field went unlet. Next time you mosey along the castle drive admiring the avenue of lime trees between the main gate and the fence at East Lodge just imagine all that grass being cropped by a herd of cows. Sir Archibald couldn’t help himself; such was the pressure for grazing he let that area for 1/- per quarter. Not that he would have allowed you access anyway.  (Walter Steuart Fothringham surrendered that moiety when he inherited the estate in 1891, for the pleasure of having a drive without cow pats. The right sort could also use it, if they had written permission.) We know the Robertsons were in the horse hire business from Murthly. They must have sub-let their grazing; but such an arrangement, common enough, does not show on the Valuation Rolls or estate ledgers. In 1910, however, they secured a lease (£2 p.a.) on the field between Lilac Cottage and the crossroads. (Uisge sits on part of it now.) A stable (10/-) was part of the deal.8

Elisabeth died in late May, 1908 at the age of 74.9 James continued to run the twin businesses. There would have been steady work and a seasonal rhythm to it at the smithy; unknackering ploughs, sharpening seed drills, shoeing horses several times a year, readying and renewing heavy gear before harvest etc. Occasionally, something different, a one-off, as when they were called upon to restore a ‘Merry Go Round’ at the castle (£2 13/8d). Every train at the station could bring a hire; or not. But with wagonettes to offer as well as sprung carriages and dogcarts James Robertson & Sons could cater for most eventualities. Such as in July 1912, when Mrs Steuart Fothringham called for two ‘brakes’ to haul 26 boy scouts to and from the summer camp she had set up near the castle. (£2 5/6d)10

By 1911, old Robertson was taking more of a back seat, had in fact semi-retired back to Spittalfield, where he once again shared a house with Kenneth Stewart, still working for the firm as a coachman. His daughters, Helen and Annie, both single, lived next door. Annie was now the Spittalfield sub-postmistress.   Next door to them was Richard, and his family. James jnr had moved his family to Murthly and assumed control from ‘head office’.

In April 1913, the family was hit by a terrible tragedy. On Monday 13th, James’ body was found in Clunie Loch. He had left Murthly that morning in a small carriage (very likely the one in the extreme left of the postcard) to pick up two ladies from Clunie and bring them back to the train station. They saw him pass the house and assumed he was going further to a wider part of the road where he could turn the horse. Along the way he spoke to a ploughman, but what happened afterwards is pure conjecture. The horse and dogcart were found at Old Limekilns with James’ body in the loch opposite, in about three feet of water. Rev. A.A. Young , minister at Clunie, and his servant removed the body and sent for the police at Spittalfield. James’ son later came and took it to the family home in Murthly. The mysterious nature of the accident, more than its suddenness caused a sensation over the whole area.

The tragedy probably hit Robertson hard. He died on the 3rd June 1913, aged 83. I can find no trace of a will, which is surprising as he seemed to have left a substantial enough business across two villages, and a surviving son, Richard. As cause of death was listed as ‘senile decay’ it may be that the family could not persuade him to sign a will while still capable. Richard tried to continue trading as James Robertson & Son.  In July, however, an action was brought against the firm at the Court of Session in Perth: “All Persons having claims against the firm of James Robertson & Son are requested to forward the same to the Subscribers, and all Parties indebted to the firm are requested to make Payment to the Subscribers forthwith.“  The firm must have had money problems from before James junior drowned in Clunie  Loch.

In 1914, the estate account for ‘shoeing horses and implement repair’, the dripping roast, was picked up by John Miller, who had the Airntully smithy. Kenneth Stewart, coachman, took over the field and stable, perhaps to operate on his own account, but that only lasted one year. Thereafter, the Robertson trail goes cold. Well, at least until I can get back into Local Studies and Archives at the AK Bell library, where the Valuation Rolls may throw light on what happened to Richard, and to those chariots once lined up in front of the Inn. Perhaps someone from Spittalfield knows more.

1. Murthly got its first phonebox in 1906. Placed inside the Post Office.

2. The reverse of the card shows a line separating space for the address from the message area. This was introduced in 1902. The colour of the HALF PENNY stamp changed from blue to green in 1905. Thanks to Les Rae for submitting a scan of the card to Murthly History Group's Facebook page.

Comment from Sandra Rowan at 14:17 on 08 January 2021.
Hi. I find this fascinating. More so because my great great grandfather John Cameron was head gardener. At Murthly Castle. Family history stories were that he married one of the two daughters of the Stewart laird. I believe they ran away. And she got disinherited. He was born in Little Dunkeld. My great aunt remembered going there by train and he picked her up in a pony and trap and took her to Murthly. This John Cameron was born approx 1795. His father John Cameron married a Margaret Stewart. In 1791. Apparently a lady Stewart paid for my gt gt. grandfather to go to Edinburgh University.