Given the way in which he rhapsodised over the Border Country, wild and rugged Highlands, and watery Trossachs, people have often missed that Sir Walter Scott also had a fondness for Perthshire. “The fairest portion” of Scotland is but one of many compliments scattered through The Fair Maid of Perth, for example. Perthshire also provides the setting for much of the action of his first novel, Waverley. Tully-Veolan, the great house of the Bradwardines, is situated on the Lowland side of the gateway to the Highlands.

Readers of the anonymously published series of Waverley Novels had long speculated about the real settings of castles, houses and scenes of climatic action. And it all began with Tully-Veolan: which great house was its model? For many, Traquair was favourite. The entrance to the grounds of Tully-Veolan is through an arch surmounted by “two rampant Bears, the supporters of the family of Bradwardine”. Bears, of course, are prominent on the iron gates leading to Traquair. However, if you look at Pernot’s “Château de Tully-Veolan” , a great illustrator’s visualising of the text, it does not bear any resemblance to Traquair. 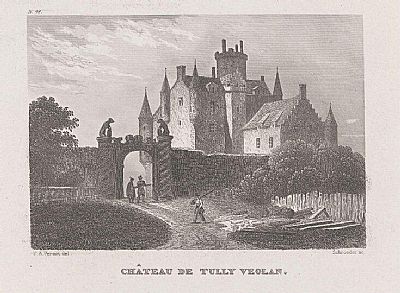 Another contender was Craighall Castle up river from Blairgowrie. Murthly and Grandtully Castles also had their champions. Indeed, in 1842 when the royal procession made its way from Dunkeld to Loch Tay, Queen Victoria’s attention was directed to the old castle of Grandtully, “which is understood to be the Tully-Veolan of Waverley”. (According to James Buist’s National Record of the Visit of Queen Victoria to Scotland) Which little touristy tidbit would doubtless have been warmly received by Victoria and Albert as true Scott devotees. A contradictory version was given in Sir Thomas Dick Lauder’s blow by blow account of each day on the tour. (Memorial of the Royal Progress in Scotland) He described the view offered when Victoria’s coach stopped at Stare Dam, before descending to Inver. “That which particularly recalls and fixes the observation of the spectator, is the extensive and finely timbered park of Murthly . . . with its old and extremely interesting Scottish mansion, supposed to be that from which Sir Walter Scott borrowed his idea of Bradwardine’s Castle of Tully-Veolan.” Although there is no suggestion of this claim having been made in her hearing, Victoria would not have been the first tourist to have been given conflicting local ‘truths’.

The truth of Tully-Veolan was published in 1829. In a footnote.

The 1829 edition of the Waverley Novels was the one in which Scott finally admitted authorship. He provided lengthy prefaces, introductions, footnotes and appendices for all of the works. In that edition of Waverley you will find the following:

“There is no particular mansion under the name of Tully-Veolan, but the peculiarities of the description occur in several old Scottish seats.” Scott then instances the House of Warrender, Old Ravelston, and the House of Dean – all in Edinburgh – before finishing with an oddly circumlocutory sentence: “The Author, has, however, been informed that the House of Grandtully resembles that of the Baron of Bradwardine still more than any of the above.”

When I read a sentence like that I know the game’s afoot. Instead of clarifying the matter, Scott here casually, slyly, deliberately muddies the water. Informed him? Is he suggesting the overwhelming resemblance of Tully-Veolan to Grandtully is mere coincidence? No, he is using a footnote, where the reader might expect an explanatory truth, to disguise his real meaning.

The House of Grandtully is not necessarily Grandtully Castle. When Scott drafted Waverley the laird here was Sir George Stewart of Grandtully, Bart. By tradition he was “Grandtully”. But the fourth generation of Stewarts then happily residing in Murthly Castle: the baronetcy remained of Grandtully, though the seat of power had long since moved.

Murthly Castle has the right location: on the Lowland side of the gateway to the Highlands through the Pass of Birnam. Whereas Grandtully Castle lies further west on the River Tay . . . firmly in Gaelic speaking Highland Perthshire.

Murthly has the requisite venerable grandeur with turrets overlooking a walled garden terraced in the Dutch style. All set in a rectilinear pattern of avenues and shelter belts already established in the 18th century. Grandtully by comparison was old, gloomy and unloved. Yes, it had been restored in the 1690s but would not blossom again until made fit for Sir Archibald Stewart’s widow, Lady Hester, who moved there in 1893.

This is, of course, pure idle speculation. Tully-veolan is only a fictional composite drawn, by Scott’s admission, from at least four sources. However, I think it’s Murthly’s location as the only and obvious fit for Tully-Veolan between Perth and the Pass of Birnam that gave Scott pause. In owning up to authorship of Waverley he may have thought “Oops! I’ve perhaps been too obvious here” and thought to cover himself by telling the truth, in a legalistic fashion.

Tully-Veolan is mostly based on the House of Grandtully: just not the obvious one.