“I have often seen ‘The Mikado’ played by amateurs, but I do not think I have ever more enjoyed a production than I did at Murthly Asylum last night.” 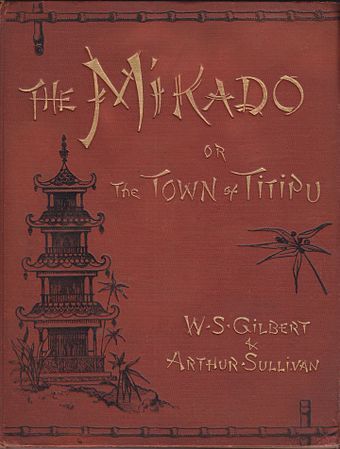 An arresting first sentence: for the location alone. Well, to our eyes perhaps, but readers of the Perthshire Advertiser in February 1910 would have been well used to references to public entertainments and social occasions there.

The reviewer was obviously impressed, for they repeated the encomium at the end of the first paragraph: “I have seen few better representations of the ‘The Mikado’ than that of Murthly last night.” Both the Dundee Courier and Perthshire Constitutional concurred with fulsome reviews of their own.

From this I think the cultural high water mark in the life of this community was reached on Friday 25th February 1910. At around ten of the clock. That’s when, with the final notes of ‘The Mikado’ still lifting towards the airy cupola above them, the audience burst into applause. Doubtless, thunderous at the back, but more genteelly among the gloved great and local good closer to the stage.

Although studiously name checking soloists, chorus, conductor, musicians, and even the stage hands, as a good local newspaper should, the PA reviewer inexplicably forgot to mention the production was the work of Murthly & District Musical Society. Then three years old, the Society had previously staged ‘Trial by Jury’ (1908) and ‘HMS Pinafore’ (1909).

The Musical Society integrated village and asylum. A brace of carpenters, a trainee solicitor, barmaid, and milliner, several parlour-maids, estate workers, a student, and the parish minister’s youngest daughter mixing it with doctors, nurses and attendants, both male and female.

Dr Lewis Bruce, the asylum's version of a Mikado, its medical superintendent, took a leading role in the Society, if backstage. Greatly enthusiastic about Gilbert & Sullivan he had found a kindred spirit in John Chisholm, the asylum’s steward (business manager). One was a master of the paint brush, sets and scenery a speciality, the other acted and sang, and arranged Arthur Sullivan’s scores for reduced resources in 'the pit'. Their link to like-minded G&S enthusiasts in the village were the Mitchells: James, who had the joiner’s shop beside Dunsinane Cottage in Station Road, daughter Alice, a milliner, and James jnr., a carpenter. 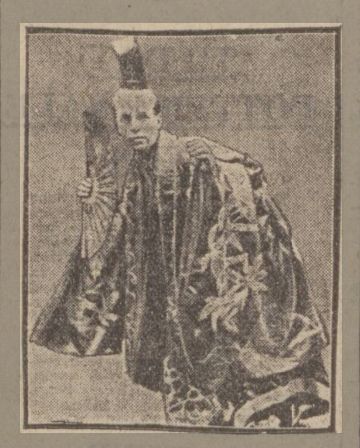 Yes, there were participants from further afield. The “District” in the Society’s title was fairly elastic. J. D. Allan, for example, whose sweet tenor had brought Nanki-Poo to life, was the scion of the famous family of agricultural engineers, with several patents for ploughs and seed drills. Their workshop was over at Culthill, near Spittalfield. However, as most of their machinery destined for the rest of Britain, its Dominions, and Continental Europe was exported from Murthly Station, they were known everywhere in those markets as “Allan of Murthly”. P. T. Marshall, a great hit as Poo-Bah, was a grocer from Stanley. (His sister Mattie, a typist, was in the chorus.) The third of the three little maids, Peep-Bo, was played by Miss Nellie Duncan of Perth, an established favourite on local concert platforms for over a decade. Leader of the small orchestra, Herr Gottlieb Feuerberg, was known throughout the county as a violinist. And the conductor, F. S. Graves L.R.A.M., one of the pioneers of amateur opera in Scotland, was approaching his 25th anniversary with Perth Musical Society.

Following previous productions, expectations were high. Just before Mr Graves tapped the podium with his baton, Dr Bruce stepped to the front of the stage and read a telegram from Lord Tullibardine apologising with regret for letting duties in Westminster prevent his attendance.1  Nevertheless, Perthshire society was much to the fore, led by Col. Walter Steuart Fothringham of Murthly, his wife, and party; the Richardsons of Ballathie, and party; Mr Charles Murray of Taymount, and party, etc, etc. Anyone surprised by the parish minister Rev. Mr Mackenzie’s presence in W. S. Gilbert’s frivolous world of 'topsy turvy' could not have known that his youngest daughter was playing Yum-Yum.2 Mr William Rae, Murthly’s factor( and a widower) was also there, alone. His eldest son, Willie jnr, was no doubt at the back of the hall ogling the ladies of the chorus with the other young blades.

The performance began well, and grew steadily better. A capable rendering of the overture announced a group of courtiers artistically attired, in a beautiful Japanese setting. As the Perthshire Constitutional noted, “The staging of the opera was magnificent, the backcloth being the work – and lovely work it was – of Dr Bruce.” Costumes had arrived just in time at Murthly Station in wicker hampers, on hire from celebrated theatrical outfitters B. J. Simmons & Co. of Covent Garden. (In addition to his other talents, John Chisholm was an astute manager of the Society’s finances.)

The audience settled back for “a rich treat”. The singing of the ladies and men’s chorus proved to be one of the most outstanding features of the performance. The beautiful alto part in ‘Comes a train of little ladies’ was “never more beautifully sung”, and the sopranos’ tone had a freshness that was “delightful”. Members of the chorus seem to have been evenly split between villagers and nursing staff, albeit with some recruits from Stanley.

The soloists had clearly worked long and hard on their roles. (Like many an amateur production it had a longish gestation, with rehearsals having started the previous September.) Mr J. D. Allan (Nanki-Poo) had a pleasant tenor. Mr A. W. Osborne (Pish-Tush) and Mr D. Stewart (Go-To) acquitted themselves well. Mr P. T. Marshall was excellent as the grasping Pooh-Bah. But the reviewers, and audience, were particularly taken with John Chisholm’s Ko-Ko: “He brought to bear on his interpretation an intelligence which brought out naturally the humour and cunning of the Lord High Executioner (and) his humorous sallies were much to be enjoyed.” James Mitchell, who had acquitted himself well as a bluff and hearty Bo’sun in ‘HMS Pinafore’, seems to have suffered first night nerves and was less convincing a Mikado, but nevertheless sang his set piece effectively, and acted earnestly.

The three-little-maids-from-school were sensational. “I have never heard an amateur Yum-Yum (Miss Elsie Mackenzie) in better voice or seen her at better ‘business’.” She was “delightfully naive” in ‘The Moon and I’. Miss Alice Mitchell (Pitti-Sing) brought the house down with ‘He’s going to marry Yum-Yum’, and had to give an encore. (She had also starred as Little Buttercup in ‘HMS Pinafore’.) Miss Nellie Duncan (Peep-Bo) with much more concert than stage experience,”not only sings the notes, but thinks them as well.” 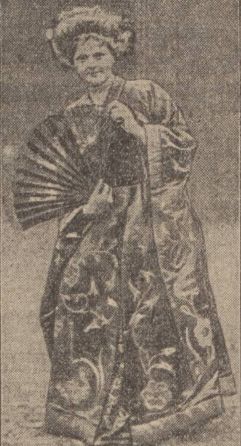 Miss Maud Lyall, a young nurse at the asylum by day, did very well in the unshowy, though demanding, role of Katisha, the jealous and spiteful older woman with designs on Nanki-Po, and sang her numbers “very prettily”. Previously, she had been a very well received heroine, Josephine, in ‘Pinafore’.

Mrs Chisholm at the piano and Mr Mowat Wilson at the organ rendered “yeoman service”. Elizabeth Chisholm was John’s wife and a member of the nursing staff. Their son, young Willie Chisholm, was also accorded a role as the sword-bearer.

The Perthshire Constitutional summed it best: “When the history of Murthly Asylum comes to be written, mention will undoubtedly be made of the entertainments given in the airy Recreation hall and prominence will be given to this performance of ‘The Mikado’.”

Chorus of Nobles, Guards and Coolies:

1. James Stewart-Murray, later 8th Duke of Atholl, was at that time Conservative MP for West Perthshire. It was a particularly towsy time at Westminster following the recent general election. Although the Conservatives and Liberal Unionists had together secured the popular vote, Asquith's Liberal Party had won two more seats. Just days prior to the performance Asquith had formed a coalition government with the Irish Parliamentary Party (the Irish Nationalists). The great and local good close to the stage, fearful of Lloyd George's next Budget, certainly needed cheering up.

2. I have no definitive proof, not a scrap of paper, saying anything like “Rev. Mackenzie ‘s daughter Elsie played Yum-Yum”. Yet there is a lot of circumstantial evidence: Elizabeth Helen Mackenzie, known to everyone as Elsie, was unmarried and living at home in February 1910. She was just 24, and thus ages with Alice Mitchell and Nellie Duncan. Rev. Mackenzie was in the audience with his wife and one of two unmarried daughters. An extensive trawl has found no other E. Mackenzie of the right age living in the area at that time.

Photos of James Mitchell as The Mikado and Miss Lyall as Katisha were taken by the The Perth Art Photo Company for the Perthshire Advertiser.